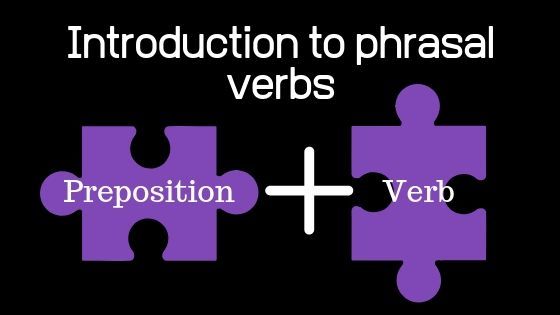 Today, in this introduction to phrasal verbs in the English language I want to show you how native speakers like myself use these composite verbs in familiar and professional settings. Hopefully, when you finish reading this article and have seen the images with clear examples and explanations, you will understand some of the instinctive trends about phrasal verbs.

In English, we sometimes combine a verb with a proposition (or two) to make what we call a phrasal verb – so a verb that is made up of more than one word.

The verb is almost always a verb of Germanic origin.

This is because Latin-rooted words change their meaning in other ways (with the use of suffixes and prefixes for example). We do not need a preposition with most Latin-based verbs because the verb itself already has the meaning you need. It doesn’t make sense to say “I matured up in Madrid”. On the other hand, you need to use the preposition “up” if you want to use the verb “to grow” because of the big difference in meaning if you don’t use it:

To grow up means to live your life as a child and mature whereas to grow means to get taller.

Phrasal verbs are less formal than their Latin rooted synonyms.

This vocabulary pattern comes from the germanic roots of the English language (think Vikings) and there is often a Latin based equivalent, a more formal synonym, available too.

Phrasal verbs are more informal than their Latin-rooted equivalents

The Latin-rooted words have been more formal since the Norman invasion in 1066. After William Duke of Normandy conquered the British isles, the ruling classes spoke in French, especially in professional situations. The working classes still used an old form of English. This trend stuck, and in modern-day English we use Latin (or French ) derived words in professional and formal situations, and phrasal verbs remain more familiar.

We conjugate the verb part (not the preposition)

Although it may seem obvious to some, in this introduction to phrasal verbs, I have to tell you that the correct way to say that your friend visited last week is “My friend came over last week”. We do not make a past form of the preposition: “My friend come overred” is incorrect. In the same way, irregular verbs maintain their irregularities when used with prepositions.

Be careful not to make simple mistakes with phrasal verb, we conjugate the verb not the preposition!

Phrasal verb basics: Sometimes changing the verb indicates how the action is carried out

The most simplistic versions of phrasal verbs are really flexible in this way. This makes anecdotal or story-telling English fascinating – with an incredible potential to express emotions, formality and familiarity just by changing the verb.

For example, let’s consider the sentence “She put on her boots and walked out the door”. This sentence has got two phrasal verbs that we can modify: “put on” and “walk out”.

The verb indicates the manner of the action

We get a similar effect if we use adverbs, indeed I could say “she anxiously put on her boots and hurriedly walked out the door. However, we can combine phrasal verb trick with the use of adverbs to create sentences that are much more poetic. So this is actually a great way to increase your vocabulary range if you want to go further than this introduction to phrasal verbs

The preposition in a phrasal verb can indicate direction

In some cases, this is painfully obvious, consider these two examples:

At other times, the verb itself is more complicated, perhaps because there is more variety in the availability of prepositions, for example with fall. However, it is often easier to understand when you consider that many prepositions indicate place.

The preposition can be used to indicate direction.

Some phrasal verbs are not as straightforward, but there is still some logic

There are other phrasal verbs which you can understand if you think about them. For example, the verb to “stand out”. In the example: “The girl stood out because she was not wearing the uniform” you can imagine that amongst a group of people there is one girl who is more obvious. We can then move on to imagine the meaning of this sentence: “Her CV really stood out.”. These are all good examples for a basic introduction to phrasal verbs.

Important information for this introduction to phrasal verbs: If a phrasal verb is followed by another verb it is usually in the -ING form

In our article on verb patterns, we saw that prepositions, and therefore phrasal verbs, are followed by the -ing form of the verb.

If another verb follows a phrasal verb, it normally takes the -ING form

“Have you ever thought of selling your car?”

“We need to carry on working until we finish”

“She gave up smoking three years ago?”

Some compound verbs consist of more than one preposition – three-word phrasal verbs!

Some verbs have more than one preposition,

I’m a big fan of producer Shonda Rhimes, especially her show “How to get away with murder”. The show is about a group of ambitious law students and their esteemed criminal defence professor. They learn about how to defend clients – and how to get away with crimes. “To get away with something” means to escape blame or punishment.

Here are some more examples:

Get along with = Have a good relationship with. …
Do away with = To abolish something. …
Walk out on = To abandon. …
Run out of = To finish the supply. …
Come up with = To produce something(An idea, Suggestion, Money) …
Put up with = Tolerate something bad.

When a phrasal verb is transitive, it is separable

You can separate transitive phrasal verbs and put the object (his feet) between the verb (put) and the preposition (up).

Have you ever wondered why you sometimes see the verb and its prepositional counterpart no actually together in the sentence?  Take a look at this example:

“To take off” and “ to put up” are transitive verbs. This means they are actions that the subject (she) does to an object (her shoes and her feet). When a phrasal verb is transitive we have the option to put the object in between the verb and the preposition. Transitive phrasal verbs are separable and therefore we have two options – to separate, or not.

There is very little difference in meaning between these two sentences.

If the object is a pronoun, you must separate the transitive phrasal verb

It is incorrect to say “She took off them” the pronoun MUST go in between the verb and the proposition.

Here are some more examples:

The other meaning of “to take off” is when an aeroplane leaves the ground and starts to fly. The plane does this action, but not towards an object. The pilot doesn’t take the plane off – the plane takes off. In this sense, it is not possible to separate “take” and “off”. We also cannot separate most three-part phrasal verbs:

Perhaps this information is not crucial in this introduction to phrasal verbs. However please bear in mind that the adverb can go before or after the verb in many cases. The positioning of the adverb changes the emphasis.

Compare these examples with a non-transitive verb:

Here are some examples with a transitive verb:

However, we cannot say :

This is because the word order is incorrect.

On the one hand, using a swear word with a preposition creates a particularly impolite type of phrasal verb. It is a way of emphasising the emotions in our speech. We hardly ever write these phrases down. Examples are:

Another way we can use emphatically express (usually negative) emotions is to insert an expletive in the phrasal verb. For example

Although you will hear this type of language on TV almost constantly, it is not appropriate to speak like this in most situations. 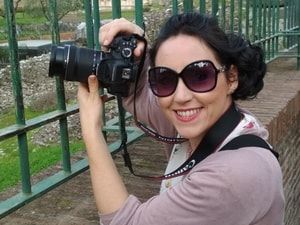 Elizabeth is a pro at setting the record straight when it comes to English grammar. In her spare time she enjoys photography and generally messing around. She tells me she is secretly thrilled that this article gave her the chance to use naughty words – and get away with it!