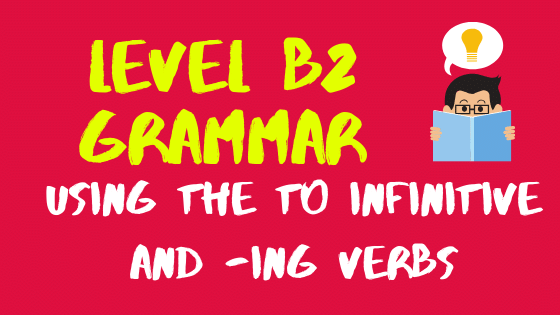 Today’s topic is looking at the use of the infinitive and -ing verbs in the middle of a sentence. Firstly, to explain what we are going to talk about, have a look at this sentence:

The suspect avoided making eye-contact with the police officer.

What is the verb in this sentence? – Ok, I’m sorry, that was a trick question, there are two verbs. The first verb is “to avoid” and the second is “to make eye-contact”. Now have a look at this sentence, and again, think about the verbs:

Many people prefer to watch their favourite TV series on Netflix.

Again we have two consecutive verbs, “to prefer” and “to watch”, however, this time the second verb “to watch” is in the infinitive form. Why is this?

Unfortunately, there are no concrete rules when it comes to the topic of infinitive and -ing verbs but there are indeed some trends. Everything depends on the first verb, so let’s have a look at some of these general patterns.

Verbs which are always followed by -ing 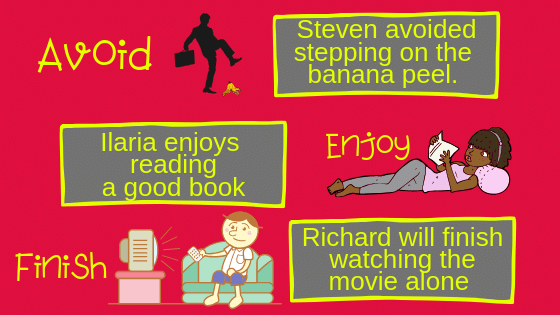 Here are some example sentences

Notice that it doesn’t matter which tense the verb is in, the second verb is always in the gerund form. Our original sentence, “The suspect avoided making eye-contact with the police officer.” comes under this category and follows the verb pattern. 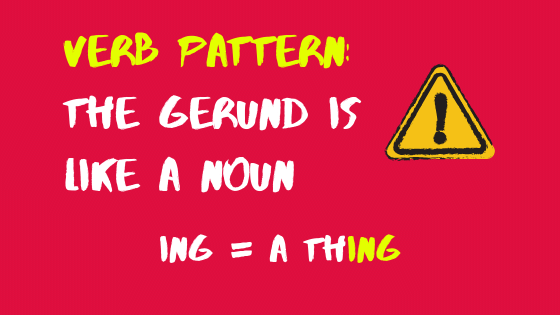 Verb pattern: The gerund form of the verb is like a noun

When you use these three verbs we usually talk about enjoying something, avoiding something or finishing something. This something is a noun. However, if we want to talk about an action, we need to use the noun form of this action verb. That is where the gerund comes in, it serves as a noun form of a verb. I always tell my students that “-ing is a thING”

Cases in which we always use the infinitive verb form

There are two parts to this section, 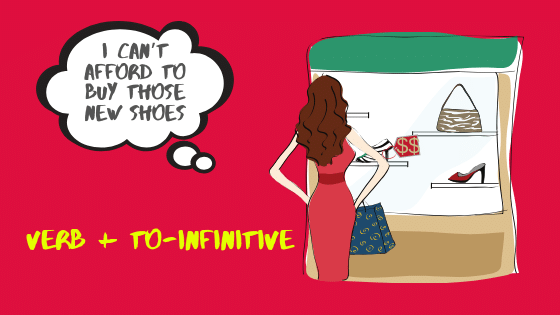 Afford – I can’t afford to buy those new shoes.

Neglect – She neglected to mention the additional fees and charges.

Refuse – I would refuse to participate in illegal activity.

b) Verb + infinitive without to: 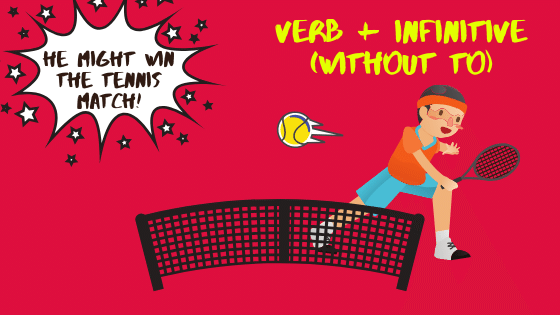 Modal verbs take the infinitive form of the verb without to.

Can – The boys can play the trumpet well.

Shall – Shall I carry on? 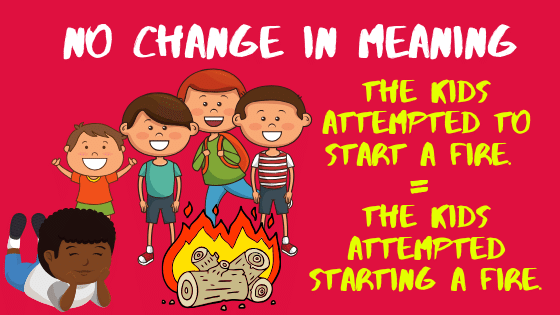 Some verbs can use either verb form and the meaning doesn’t change.

Prefer – I prefer to walk to work. = I prefer walking to work.

Verb + to infinitive or -ing (with a difference in meaning)

Consider these two sentences, do you think they are the same or different? What is the difference between them?

In both examples, the two verbs are stop followed by scare but the meanings are very different because of the verb form.

So, what is the difference between these two verb patterns, and how can we remember the rule?

As we saw before, the gerund (-ing) of a verb is a way of forming a noun from the verb. So this means that scaring is a noun, a thing. Therefore, this first sentence, “The monster stopped scaring the children” answers the question “What did the monster stop?”. We could go one step further and ask “What was the monster doing before he stopped?”. The answer would, of course, be in the past continuous form, using the -ing:

The monster was scaring the children.

He stopped scaring the children.

In the second sentence, we have the verb “to stop” followed by the infinitive form of the verb. This infinitive form indicates an action rather than a noun, and the sentence answers the question “Why did the monster stop?”.

The monster stopped scaring the children to answer his emails. 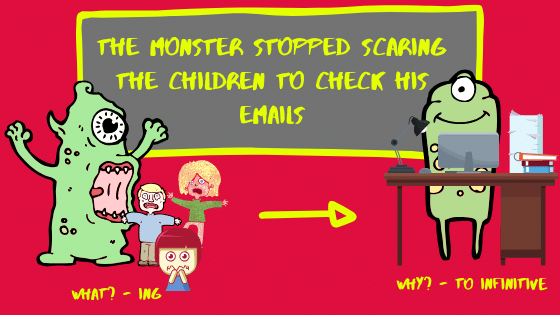 What did the monster stop? – He stopped scaring the children.

Why did the monster stop? – He stopped to answer his emails.

Now have a look at these sentences and see if you can make one longer sentence by combining them: 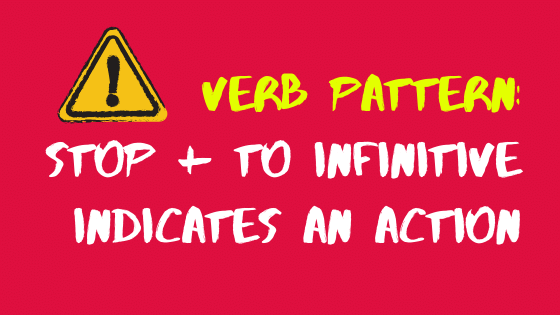 Verb pattern: after the verb stop, “to infinitive” indicates an action

This infinitive form, “to take a selfie” indicates an action rather than a noun, and gives a reason why – answering the question: “Why did the queen stop waving to the public?”.

What is the difference between these two sentences?

This verb pattern is easier to remember with a little story. Let me introduce you to my grandmother, Margaret. Margaret makes a list of everything she has to do each day – because she is forgetful. Yesterday I asked her to pick up my jacket from the dry-cleaners. And she agreed, so she put it on her list. This list of things she needs to remember to do is called a to-do list. 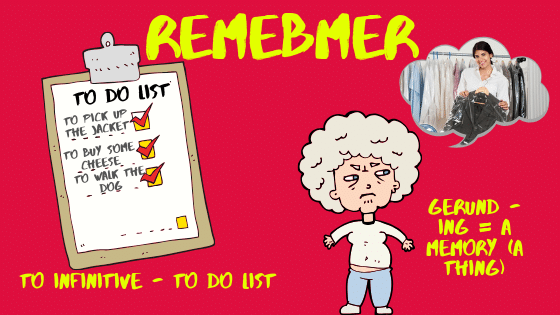 You can see in the above image that on her list she has three things that she needs to remember to do:

Well, when I went to her house in the evening to collect my jacket, there was a problem. She couldn’t find the jacket anywhere. I asked her “Did you remember to pick up my jacket?”. She assured me that she did. She confirmed that she remembered speaking to the woman in the dry cleaners about the Wimbledon tennis championship. The problem was, that although she remembers picking up the jacket, it was nowhere to be found. Just as I was about to go home, angry because I didn’t have my jacket, my grandma got a call from her Uber driver. She had left the jacket in his car! So everything worked out OK in the end.

Here we can see the two meanings of the verb to remember – depending on the form of the following verb.

The to infinitive again represents an action. It is a reminder that you need to do something and we often use a to-do list to help us.

Did you remember to sign the papers at the bank?

She didn’t remember to hand in her assignment on time so she will fail the course.

He remembered to warm the milk before adding the chocolate powder.

As we have said before the gerund form of the verb represents a thing, a noun, and in this case that is a memory.

Do you remember kissing him for the first time?

Will you remember working with me in 5 years time?

I remember going to the Ed Sheeran concert last year.

They remember getting drunk on red wine – but nothing more from that point!

Note: Forget is the opposite of to remember and works with the same verb pattern rules. Here are some examples:

I forgot to buy dog food – my dog is hungry.

She forgot asking me to the dance and invited another person instead. I’m traumatised!

Prepositions, and therefore phrasal verbs, are usually followed by -ing 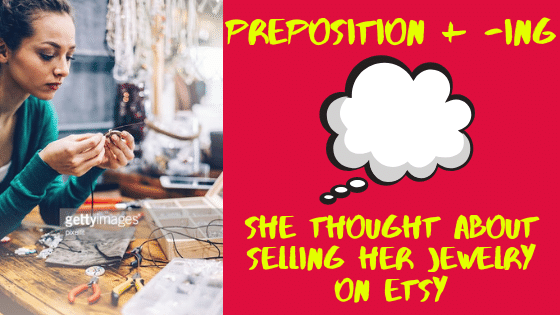 Here is a list of prepositions from Wikipedia and a few examples of phrasal verbs followed by the gerund:

I am looking forward to seeing you

Wait before putting your ideas into action

Why did you decide against investing?

She thought about selling her jewellery on Etsy.

You can find more examples of this grammar topic in our business English post: 5 ways to stop employees procrastinating in the workplace and in Ilaria’s article: music and adjectives of personality 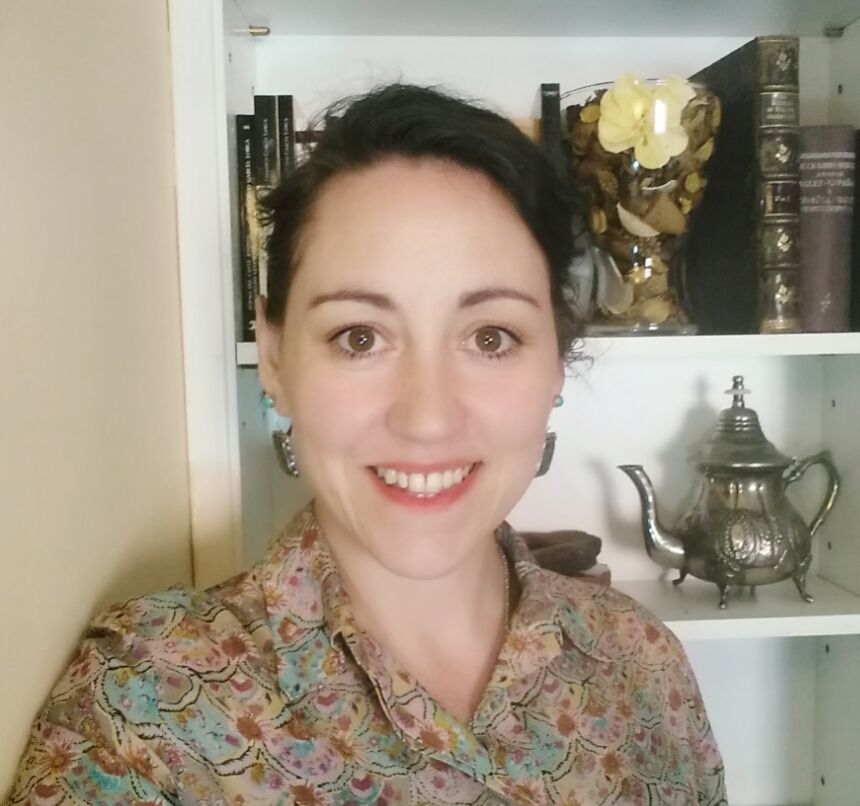 This article was enthusiastically written by Elizabeth, our teacher trainer here at Break into English. Elizabeth specialises in creating dynamic and fun lessons for children and supporting all our teachers with resources and materials.