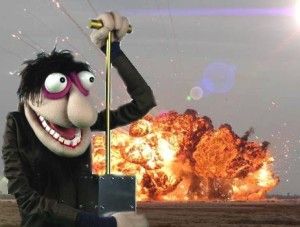 example: The bomb blew up early in the morning and destroyed the building.

example: You need to blow up the balloon if you want to play with it.

example: We will blow up the picture in order to see smaller detail.

example: He blew up when he found out that his car had been stolen.

1. The news of his wife cheating on him made him blow up.

2. If the airplane blows up, the pilot needs to eject.